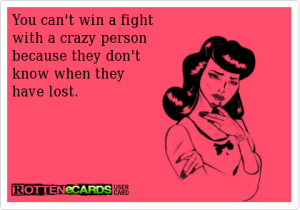 The first statement above is an example of rhetoric. The second is merely lying. While some people may not understand the difference between rhetoric and lying, it’s a difference as enormous as the one between ethyl and methyl alcohol. You don’t have to understand it for it to make you blind.

If I was late for work, and someone asked me whether I got there on time, I could say (1) Just a few minutes late, or (2) I was really trying to get here on time, and suddenly there was all this traffic. Both answers are trying to do something different. In answer (1) the phrase “just a few minutes” tries to diminish the amount of time. In answer (2) the phrase “all this traffic” combined with “suddenly” emphasizes the idea that some outside, uncontrollable force prevented me. With each answer, I want the listener to believe that (1) my lateness is not that important, or (2) I’m not really at fault.

Each of the answers above is basically “yes” I was late, so neither is a lie, yet the speaker also wants to persuade the listener of something. Choosing words to persuade someone is rhetoric. We are particularly aware of the use of rhetoric by our politicians. Yet all humans choose words this way, because we all want to persuade people to think certain things and to do certain things. Using rhetoric is a natural aspect of being human. Talk to any four-year-old if you’re not sure of this.

We may not like the rhetoric of politicians, but using it is, after all, human. Even a “plain spoken” politician is using their own kind of rhetoric: Look how straightforward my language is. That must mean it’s especially honest, and you can trust me even more.

Let’s take some examples of rhetoric from our contemporary politics. In the past year, we’ve begun to hear the phase “alt-right” to refer to particular attitudes. Alt-right is a fairly innocuous-sounding phrase, as if it might be merely a particular variation (or alternative) of rightwing, or conservative views. In reality, however, it refers to racism and white supremacy, which is not conservative, but choosing a new name to sound more innocent is a rhetorical act.

Another example of rhetoric that came up in the past week was when Kellyanne Conway, an advisor to President Trump, was asked about the White House claim of historically large crowds attending the inauguration. The claim was easily shown to be false, but instead of admitting what was obvious, Conway said the spokesman was using “alternative facts”. This phrase makes it sound as if the actual facts were not clear, as if, perhaps, there was disagreement over interpretation. In essence, however, Conway was using a nonsense phrase, because the reality about crowd size was so visible. She was not exactly lying, but she was clearly avoiding the truth.

These two examples, “alt-right” and Conway’s language, show why so many people hate rhetoric. It is often used to try to hide reality, to avoid admission of the truth, and so rhetoric begins to seem like a way of being dishonest. Perhaps we can say that a politician may do one of three things: tell the cold truth, use rhetoric to hide what is being said, or tell a lie. But maybe it’s not so simple.

Let’s look at two further examples, also from our current politics. Back during the presidential campaign, Donald Trump said that after 911, Muslims in New Jersey were celebrating on rooftops. Then people investigated, and this claim was shown to be very obviously wrong. There was no mixed evidence. It was not a case of some people said one thing, some said another. It was not a question of interpretation. It was just wrong, but Trump continued to say it.

Then in the past week, Trump has said that up “five million illegal votes” were cast, and that not a single one of those votes (which would have been cast in secret) went to him. No one—including Republican Secretaries of State—has supported the idea that millions of illegal votes were cast. It is just wrong, but Trump continues to say it.

There is a third possibility. A person who continues to repeat what is known to be wrong might be mentally incapable of recognizing reality. Maybe Donald Trump is not lying, as people are saying. Perhaps he is either remarkably uninformed, or he is so unhinged from reality that he doesn’t know what is real, and he believes what he is saying.