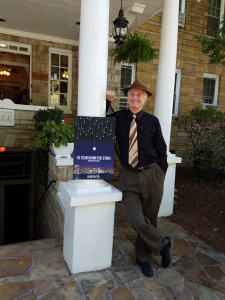 This past Sunday we had the book release party for the short story collection I’d Tear Down the Stars. When I was thinking about the evening, I admit I did not approach it gleefully. And I always tell the truth, but you know that. Somehow the idea of being such a focus of attention kind made me uneasy.

Unless my memory grows weak (ha! what is the chance of that?) when I was younger, I think I was shy, or at least reticent with public display. No, I’m sure I was shy. I believe I still am, at least partly. Given an option to stand in the glare on a stage or sit in a coffee shop with a book and watch people, I’d like a cup of coffee.

And yet, if you saw me on the stage, you’d never suspect I felt that way. I look like I’m loving it, thriving up there, and in some ways, in spite of what I just said, I probably am. I’m totally comfortable in front of a crowd. I could talk at the UN. I wouldn’t care. I had a long apprenticeship of standing in front of people talking, from 20 years blabbing away as a college professor. I know how to get the room’s attention, I know what to do with it, and when I read, I read well. That can be a useful skill for a writer.

The book release party started out slow, with not many people present, certainly not the large masses of people I had expected, literary afficianados chanting my name and waving ten-dollar bills to get in the door. I don’t know why that didn’t happen. Maybe because parking was difficult around there. Folks came in gradually, and I was really grateful for every person who showed up. After all, they didn’t have to come, did they? I had a number of friends attend, and I was particularly touched by two friends who drove four hours down from North Carolina.

We began the event with the four writers on the stage, drawing names out of my hat for order of reading, and I read last. Each of us read twice, with a break in the middle for people to . . . I don’t know what they were doing. I was talking to people and was asked to sign a few books.

As to the three writers who were kind enough to come and read with me, I was glad to hear them, and I was pleased to hear some clever, interesting writing. As I considered the writers to be my guests, I covered their bar tab, given that we had a bar in our venue. At the end of the evening, I was a little surprised that the tab was more than I expected, at $79, but you know—writers.

No doubt when you buy a copy of I’d Tear Down the Stars, you’ll be curious to know which stories I read during the world premier of the book. I started with “A Sharp Knife for Cutting Limes” (written as an attempt to try something dark and sharp), then I read an excerpt from the middle of “A Night at the Carnival” (a story that began as a description of someone I knew, who seemed to stumble from one problem to another, though that’s not what the story ended up being about), and I finished with a third reading, the title story of the book (which was told to me as an astonishing true story, but I changed the specific details).

The purpose of this book release was obviously for publicity and marketing. The reporter from The New York Times never showed up, probably that parking thing again. The main benefits I saw from doing this were (1) giving my book to people who came, so I put the book in people’s hands, and maybe they’ll read it, and isn’t that the whole point? (2) I slightly got to know the other writers, which can be good, and (3) there was, in general, the publicity of simply having the event. I’m estimating, since I haven’t counted, that we may have given out as many as 40 books.

I was talking to a friend later about the book release, and I compared it to a band just getting started who play in small bars. I think in terms of such a process, that you do what you can, take what publicity you can get, and keep trying. Maybe over time, you build up to something bigger, but mainly, you don’t stop, and you do an honest job at each place you go, even if it’s small.

And above all, you keep writing. I’ll be doing that.

Filed under Giving Birth to a Book (That's Why I'm Screaming)