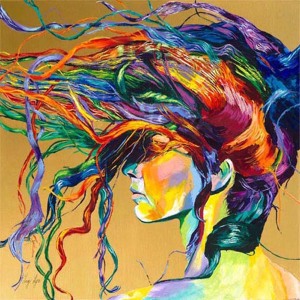 Won’t the future be great? Everything will be perfect, and people won’t be dumb anymore. Although…since it will be a time of perfect rationality, people like us wouldn’t feel at home, so it’s just as well we won’t be there.

I’m guessing that the ubiquitous logic and rational behavior of the future will extend to language, with none of the lemming-like fad following we now engage in. New words will be created because there’ll be a need for them, not because waves of emotion have washed the words onto the linguistic shore.

This ain’t the future, though (unless you’re reading this from the past, in which case, don’t vote for Nixon). Here in our own time, when we’re in the mood to consider silly things we do with language, like now, we have plenty of choices of words that could use a little scrutiny. Let’s begin with a constantly shifting acronym. Not long ago, as we became (slightly) less neurotic about sex, we began to refer to “lesbian and gay”—or since we’re still in a patriarchal society, we probably said “gay and lesbian”. Then someone said “well, what if you like both?” OK, OK, so “bisexual” was added, which led to “transgender”, even though most people don’t even know what that means.

Now it was too many words to say, so we went to the initials LGBT, and we’ve learned to live with that. It keeps us from having to pronounce all those words, and we know it has something to do with anybody who does sex different, or something. I’ve even seen exactly the same acronym in Russian (ЛГБТ) with the same meaning. Only now, sheesh, people are starting to add a Q. What the hell? A few weeks ago I had a conversation with an elderly woman who said she thought the Q stands for “questioning”, but in fact it stands for Queer. Whatever that means. Are they saying LGBT doesn’t cover everything? Why don’t we add a U for “undecided” and maybe an S for “sometimes by myself”. With LGBTQ we have passed absurdity. People in the future will look at this awkward pile of letters as a sign of how backward we were, that we were so obsessed we even needed to talk about this.

Another word carrying far more political and emotional weight than logic is “African-American”. Who thought of that? I can tell you one thing, there was no linguist sitting in the room when they came up with it. Do you know how many syllables that is? Seven. Plus a hyphen. Even black people don’t want to say it, except when they’re being formal and know they’re supposed to. In normal practice they say “black”—basically, consonant vowel consonant. Simple. Everyone else also says “black”, unless they’re meticulously demonstrating that they’re not racist. I once had a student who was writing about some incident he experienced in London, involving a black British citizen, and my apparently not very bright student talked about the “African-American gentleman” even though he was referring to an Englishman. I just hope we don’t start referring to “white” people as European-Americans. If we do, I’m going to shorten it down to Eur-Am, so I can say “I am Eur-Am”.

Let’s consider one more word, very different from the ones above. This one doesn’t refer to people, but to the country: “homeland”. We can almost name the day this incredibly emotional word was introduced into common American usage. If the word had come about naturally, from an emotional attachment people had toward the country, I would not object. But in fact, the word was injected into our parlance as the name of a government agency. Talk about your emotional attachment. Department of Homeland Security. And consider the cynical bullshit involved in the creation of that name. Here is an enormous new agency whose job will be to gather more information and watch people. How can we make everyone feel comfortable with that? Let’s use the word “homeland”, a word that sounds like it came from a cowboy song or translations of German poetry. Previously, it was a word that almost no one actually used. People are starting to use it now, though it still grates on my ears, maybe from knowing where it came from.

Or maybe I will go live in the future. I’d like to have a rational homeland where people don’t need a special vocabulary to treat each other like human beings.