“Some say I fell from grace; they’re being kind. I didn’t fall—I dove.”

This quote from page two of the novel The Mermaid Chair, by Sue Monk Kidd, embodies part of what I like about this book. The protagonist looks at the edge of life’s cliff, walks up to it, and voluntarily leaps off, hoping for wings. I’ve lived that way myself often enough, and no doubt will do so again. I relate to this protagonist, Jessie Sullivan.

But while I’m discussing this book, let’s pause for a completely relevant moment in a Malaysian/Thai restaurant. I went there with my daughter on my birthday last week. I loved the cool city decor, the ambience, the subdued elegance of the restaurant. My daughter, however, was more critical. She felt they might have done more to create a sense of intimacy for the diners (occasional divider walls, perhaps) and she noticed the phone ringing, which she felt was wrong. Here’s my point—my daughter has designed several restaurants in Atlanta, so she’s more aware than I am of such things. As to the food, we both liked it a lot, but neither of us is a serious cook. A real cook would have been cataloging every ingredient in the dishes, tasting the sauce, wondering what was in it, not just making a lot of yummy noises, like I was.

I’m a writer, so what I notice is writing. In reading The Mermaid Chair, I was almost instantly swept onto the wing of a coastal heron, to fly above the marshes in delight and admiration at the style of writing. There were phrases in the book, such as the quote I began with above, that stopped me in my tracks. I would pause, reread a sentence or phrase, admiring and thinking “Lord, look at that”. I was jealous of a writer with such skill and creativity, but now that I’m a real actual grown-up, or at least know several, I’ve learned not to hate people who are better than me. I think Kidd is better than me.

Of course you’re thinking Give us examples. Here: “…in the pink hours of the morning when the sun sat like a bobbing raspberry out on the water.” “For the first time, I could feel a hand at the small of my back nudging me toward the mysterious dwelling place of menopausal women.” “…each one of those years a bone of darkness that he’d knawed.”

I liked this book so well that I wrote to the author, and one of things I told her is that I think the book is about the yearning of the soul, which it is. Aside from any motifs involving place or characters, surely one of Kidd’s impulses in writing The Mermaid Chair was to express a character who feels that there must be something more in life. Who can be alive and not feel this way? Some people take that wild feeling and leap from a cliff, some people drink a little more, some save up for a vacation, and some people hammer the yearning down into a broken silence. In this book, Jessie Sullivan, though married, falls in love with a Benedictine monk (I’m not giving anything away there).

There is a very strong sense of place in the book. That may not be a quality you care about, but it evokes the diamonds in my eyes. The book takes place on an imaginary island off the coast near Charleston, South Carolina. I also like to bring a location to life in my own writing (as I mentioned last week, I also wrote a book using Charleston). The island in The Mermaid Chair is not real, but then again it is. How many islands near Charleston can you name? For most of us, Egret Island is as real as it needs to be, with herons, sea grass, and shrimp fishermen. 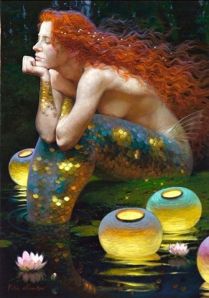 Kidd uses an interesting technique here, telling most of the book in first person from the point of view of Jessie Sullivan. A few chapters, however, are from the point of view of two different men, but those chapters are written in third person, putting a little more distance between the reader and those characters. Thus Jessie is the focus of the book, not only from having most of the chapters, but because we directly hear her voice speaking. She is also an artist, and Kidd uses Jesse’s paintings to show psychological changes in the character, as well as making the art a plot element at a critical moment.

This book contains scenes of deep tragedy, normal everyday pain, shocking craziness, and passion that forgets every voice but itself. It’s a book about being human.