Do You Wag Your Tail at Me, Sir? 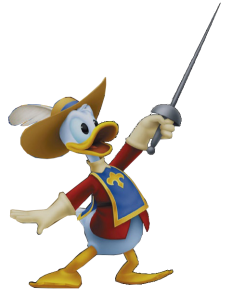 [If you would like to read the book The Three Musketeers, and if you enjoy the pleasure of surprise as you read, then do not read this blog entry. I’m going to talk about the book and I will spoil it for you.]

No matter what else I say here, The Three Musketeers is an entertaining book, full of adventures, interesting characters, and action. In my edition it was 700 pages, but it pulled me through it. A friend told me she’d heard it referred to as a children’s book, though it is clearly written as entertainment for adults. The author, Alexandre Dumas, was known for such big adventure books, also writing The Count of Monte Cristo.

It is odd that the book is named for three Musketeers. By the end of the novel, D’Artagnan has become a Musketeer, and even before that, he is both the lead protagonist and the constant companion of the other three, so that it would have actually made more sense to refer to four Musketeers.

The Three Musketeers is famous as a story of sword fighters, but in fact the name Musketeer comes from “musket” and refers to a fighting unit armed with muskets. Although Dumas chose to make the Musketeers his literary heroes, he almost entirely makes them sword fighters. They do shoot a gun on occasion, but for the most part they are ready at every moment to whip out those swords and start clacking them together. Dumas even refers to them at times as doing something with their hand on their swords, just in case.

In general the Musketeers are prone to fighting, somewhat reminiscent of rednecks in an American country and western bar growling at strangers, “Who you looking at?” The difference is that one group fights with swords, the other with broken beer bottles. I would put the four Musketeers somewhat in the same literary/entertainment category as Shakespeare’s Falstaff or the satirical cartoon character Homer Simpson. They are entertaining and fun to experience as imaginary characters, but you would not want to actually meet such people.

At the beginning, The Three Musketeers seems as if it will be a caricature of violence, similar to Hollywood westerns of the 1950s, where cowboys would fight but no blood was ever seen. The impression of “play violence” in this novel is created near the beginning with a scene in which Musketeers sword fight one another on a large set of stairs just for the fun of swishing their swords around and poking them at one another. Later in the book, however, people are both killed and wounded by swords and guns, although some of the caricature element remains, as with characters who make light of their wounds. I don’t know really, but I’m guessing that if someone shoved a long thin piece of steel into you, it would feel serious.

Against this background of making light of the sword play and even killing, it comes as a bit of a shock at the very end of the book to find quite a grim scene of violence as a woman is put through an impromptu trial (by the Musketeers) and then beheaded as she is trying to escape. In this rather horrific scene and several leading up to it, Dumas has brought two storylines back together. In a sense, this novel is really two books. Most of the novel is about D’Artagnan or his crew, but toward the end there is a rather long section which focuses entirely on the character Milady, the young woman who is breath-takingly beautiful and evil almost simply for the pleasure of it.

Although Milady is almost a caricature of evil, Dumas has done some things with her character that seem inconsistent and surprising to me. He depicts her as sneaky, lying, vicious, and cunning, and moreover, we know she is on the side of darkness because she is an ally of Cardinal Richelieu. What is surprising is that such a character is also shown more than once to be a victim as well. On one occasion, the hero of the novel, D’Artagnan, has tricked his way into Milady’s bed in the dark, pretending to be someone else who she is in love with. (And then D’Artagnan is such an awe-inspiring fool as to tell her later.)

More dramatically, and astoundingly to me, Dumas makes Milady the former wife of one of the Musketeers, who years before attempted to hang her, and in fact left her for dead, so that he’s surprised to find she’s alive.

Why did he try to hang her? But really, is there a reason why a man could suddenly grab his wife and hang her that would cause us to say “Ah, he had a good reason”? It doesn’t matter why. From that point on, no matter how despicably Milady behaved, I couldn’t help thinking “but her husband hung her”. Christ Almighty. Did Dumas really intend for us to think that was OK?

The book also makes use of both real characters and events. Historical characters like Cardinal Richelieu, King Louis XIII, or Buckingham of England are all presented (no doubt correctly) as examples of the sort of dreary powermongers who litter history and make life worse for common people. The book also contains some of the fight to capture the city of La Rochelle, so that the Protestant inhabitants could be suppressed and murdered by the good Catholic King.

For much of the book, Cardinal Richelieu is presented as the antagonist who the Musketeers both oppose and are careful of. He is generally presented as a cunning, ominous character, yet it is the killing of Milady that provides the real climax to the book. As far as the pernicious Cardinal goes, the Musketeers seem to make their peace with him afterward, so some of the bad guys do not get dealt with.