The Ayatollah From Pennsylvania 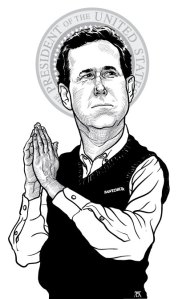 People in Iran by law have to follow particular religious rules. That’s how it is in a theocracy, someone forces you to practice religion according to their rules. It was the same in medieval Italy when Popes ruled as secular rulers. Now we have someone who wants to bring that kind of government to the United States.

In article 6 of the U. S. Constitution, there are three sentences (usually referred to as clauses). The third clause reads: “The Senators and Representatives before mentioned, and the Members of the several State Legislatures, and all executive and judicial Officers, both of the United States and of the several States, shall be bound by Oath or Affirmation, to support this Constitution; but no religious Test shall ever be required as a Qualification to any Office or public Trust under the United States.”

I have quoted the clause in full, but the part of interest here is the ending. “…no religious Test shall ever be required as a Qualification to any Office or public Trust under the United States.”

The Constitution clearly states that being a member of any particular religion should never be a requirement for being elected in this country. Like very many people these days who call themselves conservative, Rick Santorum doesn’t give a shit what the Constitution says. Santorum wants the country to be governed by religious rules that he personally chooses, and he thinks that candidates for office should be a particular type of Christian.

Although Santorum went to college (here at Penn State, as a matter of fact), he must not have taken many history classes. He apparently never heard of the religious wars in England, of people with limited civil rights because of their religion, or of people being tied to stakes and burned alive because of their religion. Unlike Rick Santorum, our Founding Fathers did study history, and there was a reason they insisted on no state religion. Santorum, however, has said, “I don’t believe in an America where the separation of church and state is absolute.”

His gross lack of historical knowledge has even led him to say, “The idea that the Crusades and the fight of Christendom against Islam is somehow an aggression on our part is absolutely anti-historical.” The ignorance here is breathtaking. Aside from the fact that Crusaders paused while they were still in Europe to kill Jews, the very first Crusade included a famous massacre of many citizens of Jerusalem. Rick Santorum clearly has strong opinions about religion, but just as clearly he has no interest in real facts, whether they concern other countries or our own Constitution.

In addition to his historical ignorance, it is typical of the grandiose arrogance of Rick Santorum that he believes any religious belief other than his own is absolutely wrong. It’s not even enough to be Christian—you have to believe exactly as he does. In his connection of religion and politics he has said, “But is there such a thing as a sincere liberal Christian…Is that really Christian? That’s a bigger question for me. And the answer is, no, it’s not.” Anyone who is not conservative, as he defines himself, cannot even call themselves Christian. Why not? Because Rick Santorum says so.

Similarly, he recently referred to Obama having a “a phony theology, not a theology based on the Bible.” When challenged on this, Santorum claimed that he was not referring to religion in that case, but just to some kind of belief, as if he does not know the meaning of the word “theology” (or the word “Bible”). Or maybe he just thought we are all so dumbfoundingly stupid that we would believe him.

According to Santorum, it is not just Obama among his political opponents who has a “phony theology”. Romney, as a Mormon, belongs to a religion that Santorum says can “threaten traditional Christianity”, and Santorum called Mormonism “a dangerous cult”. What he is trying to do here is use religion to condemn the two men who are most likely to stand in his way on the road to the White House. The 6th Article of the Constitution be damned.

Opinion polls show that there is a high level of religious belief in this country, but like many politicians, Santorum will simply make up facts, knowing that most people will never know he has done so. Thus he can make a statement like “When you marginalize faith in America” as if religion is under attack in this country. In reality, people are remarkably free to practice religion in America, but when conservatives these days repeat this “religion under attack” motif, what they really mean is we’re not allowed to force other people to follow our religion.

With such an arrogant, intolerant religious attitude, any attempt to protect all religions is claimed to be an attack on Christianity (usually spoken of in coded language simply as “religion” in general—but the audience knows what they mean, wink wink). Santorum thus refers to “the path of President Obama and his overt hostility to faith in America”. Notice that Santorum uses code there—faith—rather than refer to protecting all religions from the domination of one version of Christianity.

In addition to his famous homophobia, one aspect of Santorum’s medieval religious beliefs that has recently gotten a lot of publicity is his declaration that birth control is wrong. He said of this that “Many of the Christian faith have said, well, that’s okay, contraception is okay. It’s not okay.” As a holy warrior, Santorum literally wants to control how people have sex.

Because Santorum is a Catholic, some might see the theocracy he wants to impose on the United States as the teachings of the Catholic Church. While any theocracy is a bleak and hopeless prospect (ask the people living now in Iran), in fact Santorum does not truly follow Catholic teaching. The Catholic Church is very clear in opposing the death penalty, but Santorum supports it. Exactly as he does with the U. S. Constitution, Santorum picks and chooses which parts of Catholic doctrine he happens to like.

On January 1, 1802, Thomas Jefferson, one of the most prominent of the Founding Fathers, wrote in a letter to the Danbury Baptist Association, “I contemplate with sovereign reverence that act of the whole American people which declared that their legislature should ‘make no law respecting an establishment of religion, or prohibiting the free exercise thereof,’ thus building a wall of separation between church and State.”

In 2012, Rick Santorum wants to rule us through laws based on his personal religion.